The following two articles appeared in the Lloyd's List Newspaper of 15 September 2004.

IN TIMES of inflated freight rates and full shipyards those shipowners fortunate enough to have an early delivery slot from yards suddenly find themselves very popular.

Intership Navigation of Limassol is no exception to this phe- nomenon.

With six ships on order — two product tankers and four bulk carriers for early delivery — the company has been subjected to a number of purchase offers.

But, unlike the many companies that give in to dreamy offers, Intership has not been swayed.

“We have had so many approaches for the ships we have on order,” confides Dieter Rohdenburg, the company’s operations manager. “But that is part of our philosophy — we see ourselves as shipowners and, although it may be tempting to get a good profit, it is a very shortsighted view.

“To replace that vessel you will need more money to build a new one and it will take a lot of time before you get it.

“In that period you would probably have earned more money if you had kept the existing vessel than the profit you would have made with a quick sale. So we have been approached, but we have declined.”

In fact Intership had hoped to have a much bigger newbuilding programme by now, but price developments, particularly in China, and the steel price have put a stop to that for the time being.

“We decided to wait a little bit and see where it goes,” says Mr Rohdenburg. “It will come down and now is not the right time to order ships.”

The company’s strategic fleet plan sees it disposing of older ships of more than 10 years of age, so it continually has new ships as the old ones naturally phase out.

While it has for years been dedicated to dry cargo tonnage, the company has now started to take tanker tonnage. Last year it took delivery of the first of a series of six product tankers of 40,000 dwt and a further two 45,000 dwt ships for management, marking a fleet of eight product tankers at the moment. The company is also expanding in the gas business.

“We are always looking for new ideas and more possibilities,” says Mr Rohdenburg. “Our fleet structure is such that when we come up with a new idea we always try to have a small fleet in that sector, but our core business is the 18 dry bulk carriers that we operate from our office in the US.”

However, the company has never felt the need to enter the containership market.

“We believe in industrial relations and having direct contact with the cargo owners,” he says.

“We make sure that we have commercial control over our fleet and that we have direct access to the charterers, allowing us to build long-term relations.

“In containers you cannot do this as you are completely and utterly reliant on the goodwill of some liner operator. That is not what we want.”

Intership is also considering the possibility of diversifying into the liquefied natural gas sector, although this plan is very much in its infancy.

Unusually for a shipping company based in Cyprus, Intership started as a shipowner and then added a small third party shipmanagement service to its pool.

“We consider shipowning as our core business, but in the past we have done third party management for people that we have had dealings with over many years,” says Mr Rohdenburg.

“These people have a similar attitude and approach towards shipping and maintenance of vessels. We are not shipmanagers and we are not canvassing the market to become shipmanagers.”

WHEN Intership Navigation Co first established its business in Cyprus 16 years ago the main attraction was the favourable taxation laws.

In 1988, when the company was founded, Cyprus offered lower overhead costs for the management of ships than Germany.

But since then Cyprus has boosted the benefits for companies operating there.

“We are quite a bit more cost-efficient here than our German counterparts and we expect that to remain for the foreseeable future.

“We still have benefits and advantages over Germany and one is with the company audits.”

Whereas in Germany audits tie up a great deal of resources within the office, often for months, Cyprus does not impose such rules.

Mr Rohdenburg also points out that good information sharing is another strong selling point for remaining in Cyprus.

“The shipping infrastructure is fairly good here now,” he says. “We have direct access to the government through the Cyprus Shipping Council.

“We have to some extent the possibility to assist in developing shipping legislation and to have influence on it.

“Because it has such a tight community of big companies in such a small area, Cyprus has an infrastructure that is very valuable.&rdqu 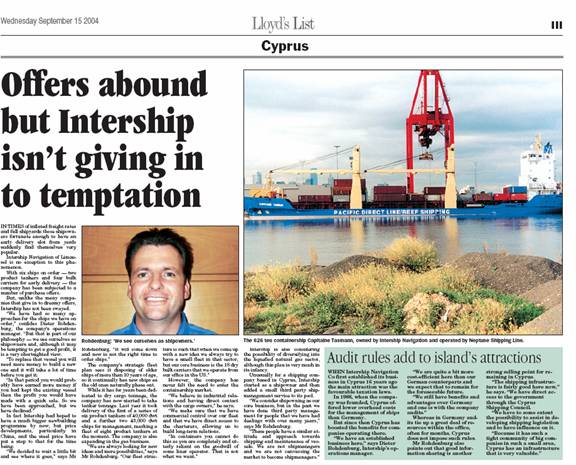