A mini football tournament was held in Cyprus, organized from shipping companies with all proceeds going to Charity.

ISN employees put together a team from all departments, which competed in the tournament, under the Cyprus hot summer sun. This of course was not a world cup match, but we didn't seem to mind, as we all had fun and tried to win one for ISN! We were greatly outnumbered, as other teams had more members to choose from, and a nice bench of spare players. Of course this was in the end to our advantage, as our players started to bind together, and form a more solid team, which surprised everyone and reached the finals!

Second match, we managed to get the team together, and won an easy 3/1 against Vship.

Next match was after the tiring Vship match, which was under the hot sun once again. The Interorient team crashed us 1-6, but we would have the chance to avenge...

Reederei Nord lost 4-0 from us, and we went again in the semifinals to battle against Interorient team once again. This time, with a more organized team, and more rested, we stood our grounds, leading 1-0. Final score was 2-2, and after overtime, we ended up in Penalties, where our Goalkeeper did wonders, catching every single penalty and we won 4-2.

In the final, Marlow team was way ahead of our league¡K After a tiring semifinal, we didn¡¦t stand a chance, and way outnumbered, gave in to a 1-4 defeat. Still, being 2nd in a tournament where everyone said we wouldn¡¦t even qualify, makes us somehow like the Greek team in Euro cup!
The Team members (from top left to bottom right) were:
Harris Ioannou - Operations dept (Goal Keeper - aka "the WALL")
Christoforos Panayi - Accounts dept (mad scorer)
Tomasz Mazurek - Personnel dept (Feet of fire)
Christofer Adami (THE COACH)
Marios Antoniou - Operations Dept (iron foot)
Andreas Eleftheriou - Accounts dept (Team Captain and MVP)
Panicos Economides - Accounts dept (master of the dribble)
Angelos Demetriou - IT dept (disaster strikes)


Weld done to all and Keep it up guys! 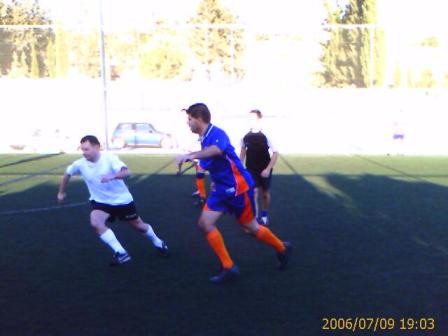 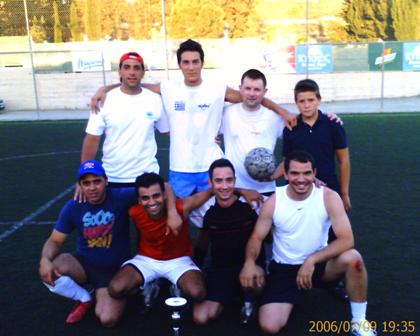