A TRUE RECORD – CHRISTENING OF FIVE VESSELS (plus 1 steel cutting ceremony) IN 5 HOURS!

Intership has recently broken all records by christening 5 vessels in only 5 hours! The record was broken at the Shandong Huanghai Shipyard in Shidao, were the MCP LIMASSOL, MCP FAMAGUSTA, MCP KYRENIA, MCP LARNACA and MCP NICOSIA were christened by five gracious godmothers!


After a long journey via Vienna to Beijing we had to learn that punctuality is more important to Chinese airline staff than the travel needs of a bunch of foreigners - we missed our connecting flight to Yantai by 20 minutes. Thanks to the swift action by Eugen Adami, the group was rebooked onto a flight to Qingdao which left only 1 hour later. Transportation from the airport to the shipyard was also swiftly rearranged, and we arrived at Shidao in time for dinner.

The dinner was hosted by the Shipyard, and was joined by Mr Hartmann who arrived from Germany, Marcel von Eijsden of Onego Shipping & Chartering, the charterers of the MCP LIMASSOL as well as the ISN supervision team. Further guests were Ingemar Lundgren (Cederval & Soener), and Liu Haijin of New Century Shipbuilding. A number of speeches were given, and the godmothers had the time to rehearse their speeches for the following day…

The next day, Thursday 31st May was the big day: 5 vessels were waiting to be christened. After a ‘light’ Chinese breakfast we set off for the shipyard. When we arrived at the shipyard, everybody was surprised of the vast amount of blocks in the yard, and the number of red ships for ISN that were nearly ready for delivery. And the entire shipyard was only working for ISN…. (nearly all ships under construction are the series of 18 MCP vessels).

Andri Charalambous was the lucky first to christen the MCP Limassol. The vessel had already been in the water, but was back on the slipway for final minor works. But before Andri could do her job, the group was treated to a lovely musical performance by a Chinese orchestra, and of course some words were said by the shipyard president and other dignitaries. Then the Chinese, German and Cypriot national anthems were played.

When Andri’s time finally came, she did a marvelous job: the champagne broke on first attempt! Fireworks went off all over the vessel to celebrate the successful christening.

The ship’s crew, which was already fully assembled took to the microphone under the leadership of Capt Bernasol and sang a couple of songs for the enjoyment of everyone around.

There was no time to waste and the group moved to the second vessel waiting to be hit by a bottle, the MCP Famagusta. The MCP Famagusta is in the early stages of construction, but was nevertheless proudly displaying her full name! To the delight of Costas Georghadjis, who is a refugee from Famagusta which he had to flee in the 1974 war. His wife Julia was therefore the perfect choice as a godmother!


Unfortunately Famagusta was playing ‘hard to get’, just as in real life – and Julia need two attempts to break the champagne. But what counts is the final result, and it was therefore to Costas’ satisfaction that Famagusta ‘was eventually won’.

The next ship in line was the MCP Kyrenia, like Famagusta named after the Cypriot town in the Turkish-occupied North of Cyprus. Like the Famagusta, the Kyrenia was in her early stage of construction - which did not keep her godmother Eliana Constantinidou from wishing her and her crew all the best and many happy returns. As for the other vessels, fireworks went off immediately after the bottle had succumbed, and it felt at times like an excellent New Year’s Eve party!

The MCP Larnaca was the next one in line. Even though she was still on the building slip, she looked ready to hit her element very soon. After some problems with the microphone, Cynthia McBride managed to christen the vessel on first try. The fourth bottle burst, with one to go….

The last ship for the day was the MCP Nicosia. She is already in the water, and looked impatiently ready to sail. So much so that the godmother Liana Papadopoulos needed four attempts and the help of her husband to break the champagne! It was as if the ship did not want the christening party to end….

Fireworks went off again, and everybody congratulated everyone on a successful christening ceremony, and an unusual record.

But wait – the ceremonies were not over yet! The time had come for Mr Hartmann to cut the first steel plate of ISN’s new project, the 25,000mt dwat multipurpose tweendeckers which will be delivered from the second half of 2008 onwards.


Mr Hartmann did an excellent job making a straight cut – helped only by a big steel cutting machine….

The entire group then went for lunch at a hotel nearby, where traditional Chinese food was enjoyed by everyone – and of course the Mau Tai was flowing to accompany the lunch party. KAMPEI!


The afternoon was set aside for a site-seeing tour to a big Buddha statue.

In the evening another party followed, this time with Western food – to the delight of some of the guests…. It was a truly great christening ceremony, and all of the god mothers did an excellent job. Eugen Adami and Mr Hartmann thanked the god mothers for helping with this important task, and the god mothers were given presents to commemorate the event. The ISN supervision team was handed presents from the godmothers for their respective vessels, including framed portraits for which Capt Klein of the supervision team promised to find the perfect place on the vessel..

On the next morning, the group flew for two very enjoyable days to Beijing, before returning back to Cyprus on 4th June. 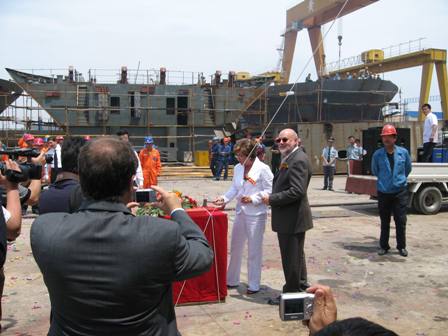 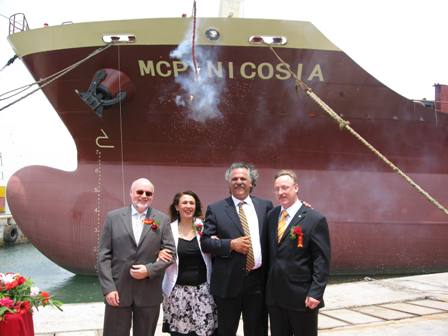 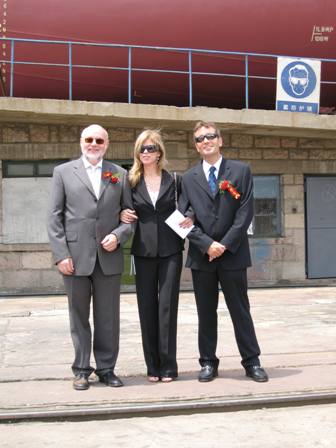