7 March 2007. At a meeting in Copenhagen on March 1st, 2007, the Intership Navigation Training Centre (ISNTC) of the Phillippines signed an agreement with MAN Diesel for the installation of an ME-B simulator at their facilities in the Malate district outside Manila.
Each year, more than 25,000 training units are taken by students at the ISNTC, which was founded in 1994. This ranges from short, special courses, such as crane operation, fire-fighting, etc., that last just a couple of days, to ISNTC’s own, three-year, cadet-training courses. Approximately 100 students pass the cadet courses annually, half of whom are engineers. 15% of the 25,000 training units are taken by external students as the ISNTC caters for students from all over the Phillippines.
The order for the ME-B simulator comes less than six months after an ISNTC order for six MAN B&W 6S40ME-B engines. These will be built by STX in Korea with the first to be delivered towards the end of 2007 – MAN Diesel is developing the ME-B simulator while work on the first ME-B engine progresses. When the simulator is installed, the ISNTC will offer courses to both internal and external students. These courses will be held by two of the centre’s instructors who will receive a thorough grounding from MAN Diesel PrimeServ.
Nor is the ISNTC a stranger to ME-engine training. This February saw the first course held at the ISNTC utilising one of MAN Diesel PrimeServ’s mobile ME-simulators. Captain E.H. Adami of Intership Navigation says: “We are grateful that MAN Diesel has listened to our proposal and adopted the good idea of having a training centre in the Phillippines, which is home to so many of the world’s seamen. I am confident that use of the simulator will be fully booked, especially since it will allow us also to conduct training for all types of ME-engine. In that regard, the simulator is unique in the world. I believe it is the first time in engineering history that a simulator is being developed as the first engine is being built. This is proof of the deep, long-lasting cooperation between our two companies. It is a very innovative step by MAN Diesel and one we very much appreciate.”
Senior Vice President of MAN Diesel PrimeServ, Otto Winkel adds, “For us at MAN Diesel PrimeServ, this agreement is a perfect fit – we have now a bridgehead in the Phillippines with full access to training facilities as we also intend to hold PrimeServ courses using the ME-B simulator.”

About MAN Diesel
MAN Diesel is the World’s leading provider of large-bore diesel engines. The company designs two-stroke and four-stroke diesel engines, generating sets, turbochargers and CP propellers, for manufacture by MAN Diesel and its licensees. The engines have outputs ranging from 450 to 97,300 kW. MAN Diesel has approximately 6,400 employees, located in Germany, Denmark, the UK, France, the Czech Republic and China. The company’s worldwide service organisation, MAN Diesel PrimeServ, consists of a network of own service centres, supported by authorised partners. MAN Diesel is a subsidiary of the German industrial group MAN AG, which is listed on the DAX stock index comprising the 30 largest companies in Germany. 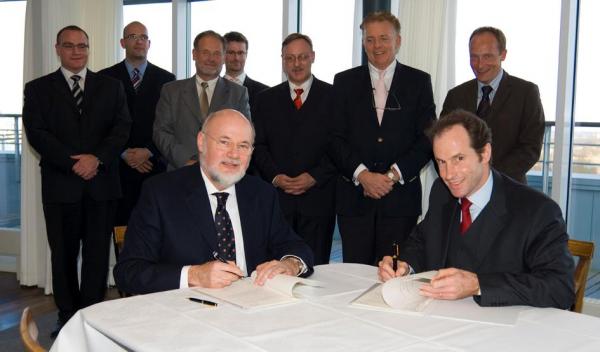