which brought all together to a total of seven vessels!! The record was broken concurrently at Shandong Huanghai and Rongcheng Shipyards in Shidao, with the christening of M/V PACIFIC ADVENTURE, M/V PACIFIC ADVANCE, M/V UBC CARTAGENA, M/V CORK, M/V UBC CEBU, MCP PAPHOS and M/V ARALDIEP.

After accepting the invitations sent by ISN management the “Christening Group”, accompanied by Capt. Eugen Adami and Mr. Bernd Oeltjen Head of Personnel Dept of ISN, was ready for departure from Larnaca Airport on 25th of March.

God-mothers, Mrs Ulla Taylor and husband Capt. Vic Taylor as well as Mrs Dai Xiaohong and partner Mr. Uwe Kowalewski had flown to China earlier than the rest of the group.

The flight from Larnaca with Emirates via Dubai and Beijing to Yantai took off at 19:30 pm.

Even though it was a long journey the “Christening Group” was very pleased with the Business Class Service offered by one of the top range airlines of the world. The new ultra long range Emirates Boeing 777-200LR is certainly one of the most technologically advanced aircrafts in the world. Setting new standards in efficiency, speed and comfort made the journey smoother and easier particularly with the lie-flat seats!!

After arrival to Yantai airport on the 26th of March at 19:00 lt the bus was waiting to transport the group to Shidao Hotel. It is important to mention here that after having loaded all our luggages into the bus it was  realized that there was no longer any more space in which to move!!!

Upon arrival to Shidao hotel after approximately one and a half hours drive the group were welcomed by Mr. Alfred Hartman, Mr. Dieter Rohdenburg Head of Operations Dept. of ISN who arrived from Germany, godmother Mrs Ulla Taylor and her Husband Capt. Vic Taylor as well as the ISN supervision team. Further guests were Mr. Ingemar Lundgren (Cederval & Soener), and Capt Eberhard Koch (OELSM).

After a few relaxing cups of Chinese green Tea and some light toasts the Group went to their rooms for a good night’s rest.

The next day, Friday 27th of March, was the big day: 6 vessels were waiting to be christened. After a ‘light’ Chinese breakfast the group set off for the shipyard. On arrival at the shipyard, everybody was surprised of the vast amount of people in the yard, and the number of red ships for ISN that were nearly ready for delivery. The entire shipyard was only working and singing for ISN!!

The group was treated to a delightful musical performance by a Chinese orchestra, followed by the Chinese, German and Cypriot national anthems and, of course, some nice words from the shipyard president, Capt. Eugen Adami and other dignitaries.

The time had come. Mrs Ulla Taylor was the first to christen M/v Pacific Adventure. The vessel had already been in the water. She did a marvelous job: the champagne broke on first attempt! Fireworks went off all over the vessel to celebrate the successful christening.


There was no time to waste and the group moved to the second vessel waiting to be hit by a bottle, the M/V Pacific Advance. The vessel was already in the water and she was looking as one of the highest quality built vessel’s of ISN, making it this way a perfect choice for my wife, Andrie Antoniou.


Andrie was ready to hit her target. Unfortunately, the first attempt was unsuccessful due to the horizontal rope holding the bottle having become loose, leading the cut rope to touch the ground thereby reducing the speed of the champagne bottle.

Therefore, thanks to the assistance of Capt. Adami, Andrie was allowed a second attempt in order to break the champagne bottle. What counts is the final result, and it was therefore to the satisfaction of the Safety & Quality Dept, which had already identified the root cause of this incident, when the bottle smashed.  As in the case of the previous vessel, fireworks went off immediately after the bottle had succumbed and kisses were exchanged as well as various photos taken by the photographers.

The next ship in line was the UBC Cartagena, which was on the building Slip. Her god-mother Maria Shiakallis managed to christen the vessel on the first attempt. We were all quite confident that Nicos had trained her adequately to hit her target. As for the other vessels, fireworks went off immediately after the bottle was broken.

The UBC Cork was the next one in line. She was ready in the water pending some minor construction parts prior delivery. The fourth bottle burst, with one to go and Julia managed to successfully complete her mission.

The next vessel was the MCP Paphos. She was already in the water, and looked ready to navigate. So much so that the godmother Nadia Emilianou needed four attempts and the help of Capt. Adami, who had to finally cut the rope, take the champagne bottle and break it by hand on the side of the steel plate! It was as if the ship did not want to be christened or the bottle was made of iron!!

Fireworks went off again, and everybody shouted loudly since what counts is the final result.

The last ship for the day was UBC Cebu which was also in the water. One of the first in the series of the cement carriers to be built by ISN.  Evangelia was ready to take revengel. She managed to christen the vessel on the first attempt to the satisfaction of Thomas and also Capt Zoran Savic who was going to be in command of the vessel during delivery from the shipyard.

Fireworks went off again, and everybody congratulated everyone on a successful christening, whishing all the best to the crew and Navigating Safely in Calms Seas!! A tour was then conducted on-board M/V Pacific Adventure by Capt. Christian Harling with a brief explanation and introduction to the ship’s equipment.


The entire group then went for lunch at a hotel nearby, where in a dedicated room the God-mothers were given the opportunity to make their brief speeches and present their “icons” to the ISN supervision Team including framed portraits for their respective god childs. Mr. Eugen Adami and Mr Alfred Hartmann and the President of the shipyard thanked the god mothers for helping with this important task, who, in turn, were presented with gifts to commemorate the event.

Following this, a traditional Chinese feast was enjoyed by everyone – and of course the Mai Tai was flowing to accompany the lunch party. KAMPEI! KAMPEI!

In the evening a dinner was arranged in Shidao hotel however due to the enjoyment of the lunch party and the long day few people were still standing. Obviously, they preferred to get some good rest.

On the following day, Saturday 28th of March, one last ceremony was waiting for us in order to achieve our objective. The Ceremony was due to take place at Rongcheng Shipyard therefore we left our hotel at 09:00 am. We arrived at the shipyard and we were treated once again to an excellent musical performance by a Chinese orchestra, singing and dancing followed by the Chinese, German and Cypriot national anthems and, of course, some nice words said by the shipyard President, Capt. Eugen Adami and other government officials.


The last ship on the list M/V Araldiep was ready to be christened. Everybody was waiting for this moment. God-mother Mrs Dai Xiaohong managed to break the bottle with the first attempt.


Fireworks went off again, and the vessel’s horn was signaling the end of a memorable ceremony which we shall never forget.
A tour on-board M/V Araldiep, explaining the capabilities and the navigation equipment of the vessel, was enjoyed by all present.

The entire group then went for lunch at Shidao hotel, where the God-mother was given the opportunity to make her brief speech and exchange presents. Mr. Eugen Adami and Mr Alfred Hartmann and the President of the shipyard thanked all the god mothers and their husbands for helping with this important task, and were presented with further gifts to commemorate the event. KAMPEI!!

The afternoon was set aside for a site-seeing tour to a big Buddha statue.

In the evening another party followed which I am sure everybody enjoyed! It was a truly momentous christening ceremony, with all of the god mothers having carried out a most excellent job.

The next morning, Sunday 29th of March, the group flew for two very enjoyable days to Beijing, where we had the opportunity to visit, amongst other sites, the Forbidden City, Tiananmen Square, Summer Palace and the very famous Silk Shopping mall as well as some excellent restaurants like Quanjude Qianmen Roast Duck and, of course, enjoy the legend of Kungfu Show before returning back to Cyprus on 31st of March.

I can of-course continue describing the enjoyment and adventures of our memorable visit to Beijing however, I would like to conclude with Beijing 2008 Olympic games slogan which I have read on a big sign at Beijing which was stating in big letters “One world one Dream”.

"One World, One Dream" is simple in expressions but profound in meaning. It is of China, and also of the world. It conveys the lofty ideal of the people in Beijing as well as in China to share the global community and civilization and to create a bright future hand in hand with the people from the rest of the world. It expresses the firm belief of a great nation, with a long history of 5,000 years and on its way towards modernization, that is committed to peaceful development, harmonious society and people's happiness. It voices the aspirations of 1.3 billion Chinese people to contribute to the establishment of a peaceful and bright world.


Likewise in Intership Navigation we are One company, One team. This was a prodigious christening ceremony for which we had the honor to be present and will always remember thanks to Capt. Eugen Adami and Capt. Alfred Hartman!!! 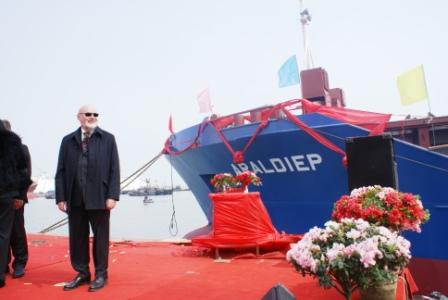 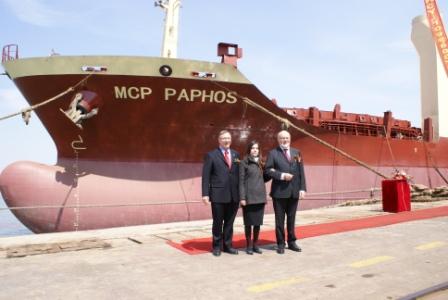 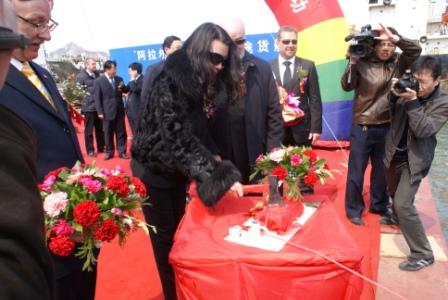 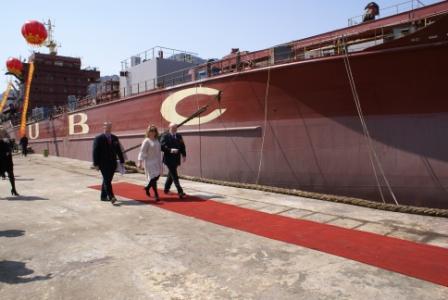 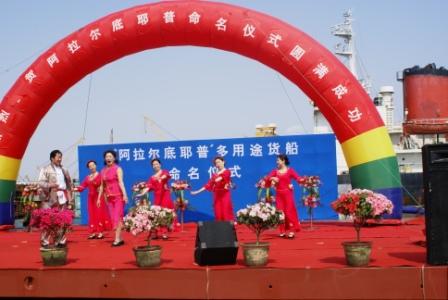 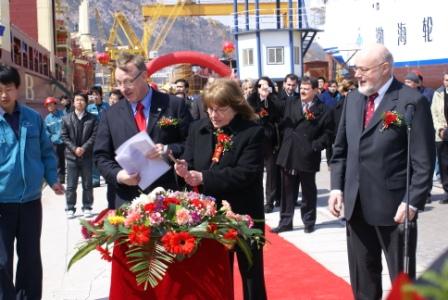 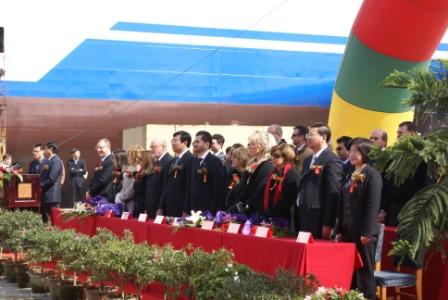 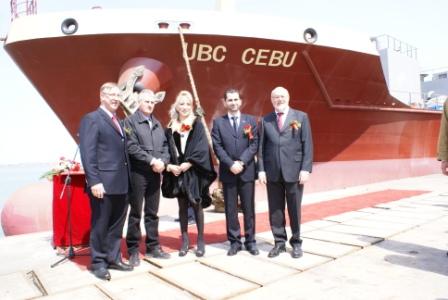 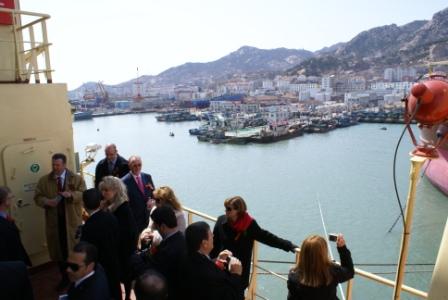 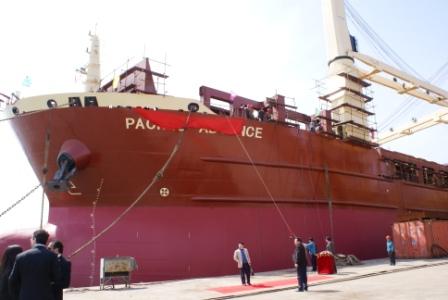 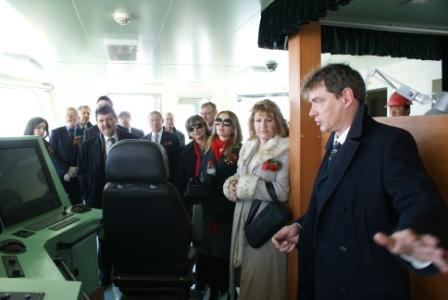 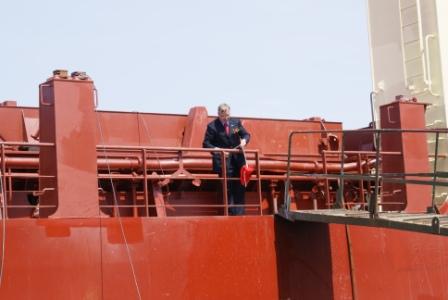 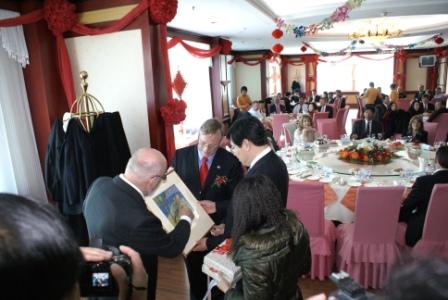 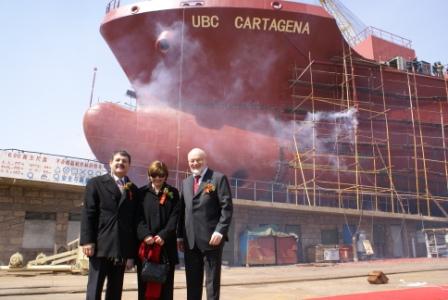 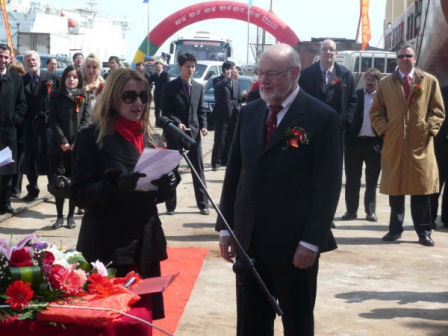 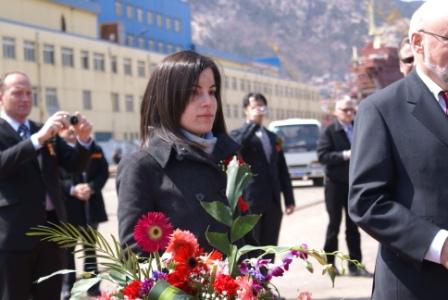